A new commissioned statue has been unveiled as part of the Vietnam War Monument, located in Veteran’s Grove, at the corner of Penn and Juliana Streets in the city of Bedford, P.A. 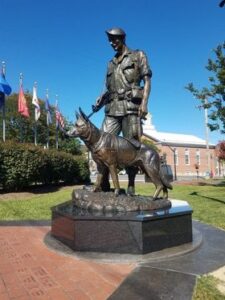 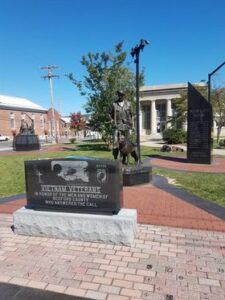 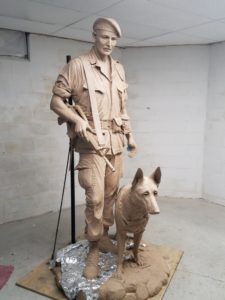 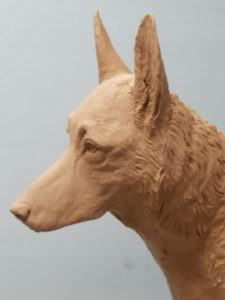 Veteran’s Grove is the result of the Bedford County’s citizen’s efforts to pay tribute to the men and women of the county who served in the armed forces in our nation’s military. Veteran’s Grove currently features memorials to veterans of the Civil War, WWI, WWII, the Korean War and the Vietnam War.

A brick Honor Walk, still a work in progress, will be open to any Bedford County veteran who wishes to be part of Veteran’s Grove.  This path will honor all United States veterans in every conflict and time period.

Hartsock was serving as a Staff Sergeant in the 44th Infantry Platoon Scout Dog (IPSD), 3rd Brigade,  25th Infantry Division, when, on February 23rd, 1969, he was killed in action at the Dau Tieng Base Camp in Vietnam. During a firefight on that day, in Hah Nghia Province, Republic of Vietnam, Hartsock smothered an enemy satchel charge with his body to protect those around him and was mortally wounded in the explosion.

Hartsock was age 24 at the time of his death and was buried in Rocky Gap Veterans Cemetery, Flintstone, Maryland. The chapel at Rocky Gap Veteran’s Cemetery is dedicated to Sergeant Hartsock. Three portraits and his Medal of Honor Citation are displayed in the chapel.

“On this date, when the Dau Tieng Base Camp was under heavy enemy rocket and mortar attack, Sergeant Hartsock and his platoon commander spotted an enemy sapper squad which had infiltrated the camp undetected. Realizing the enemy squad was heading for the brigade tactical operations center and nearby prisoner compound they concealed themselves, and, though heavily outnumbered, awaited the approach of the hostile soldiers. When the enemy was almost upon them, Sergeant Hartsock and his platoon commander opened fire on the squad. As a wounded enemy soldier fell, he managed to detonate a satchel charge he was carrying.”

“Sergeant Hartsock, with complete disregard for his own life, threw himself on the charge and was gravely wounded. In spite of his wounds, Sergeant Hartsock crawled 5 meters to a ditch and provided heavy suppressive fire, completely pinning down the enemy and allowing his commander to seek shelter. Sergeant Hartsock continued his deadly stream of fire until he succumbed to his wounds.”

“Sergeant Hartsock’s valorous efforts resulted in the disrupting of the enemy squad’s mission, saved his platoon commander’s life, and, indirectly, the lives of many other comrades. Sergeant Hartsock’s extraordinary heroism and profound concern for the lives of his fellow soldiers were in keeping with the highest traditions of the military service and reflect great credit on him, his unit, and the United States Army.”

Sergeant Hartsock is the only dog handler that has been awarded the Congressional Medal of Honor.

Wayne has portrayed Hartsock with his trusted scout dog, Duke, which also lost his life on that day.

After much thought, Wayne has named the statue “Watching Over Heroes and Friends”.