This monument tells a story of Somerset County men "who gave their all to save a divided nation," said Richard Sturtz of Lambertsville. Sturtz came up with the idea for a monument and approached Wayne Hyde, of Bedford County, who had recently completed a Civil War monument in Missouri.

Following Wayne’s thorough research, this bronze frieze was created in order to honor the soldiers of the 142nd Volunteer Infantry. About 260 of the regiment's 935 members were from Somerset County.

The infantry was commanded by Col. Robert P. Cummins, a former Somerset County sheriff who was laid to rest in Somerset Borough.

The monument captures Col. Cummins urging his men to turn the tide of the battle while leading his regiment in a counterattack against Confederate forces during the Battle of Gettysburg,

It dramatically depicts Col. Cummins, seconds after his horse was shot out from underneath him, pointing his sword to the regimental colors and shouting "Rally round the flag!"
Moments later, Cummins was mortally wounded. He died the following day.

The regiment was credited with impeding the momentum of "overwhelming" Confederate forces until additional Union troops arrived on the field, according to a plaque that has been affixed to the monument. This regiment ultimately suffered great losses.

The intensity and fury of the moment has been captured in bronze for perpetuity.

Each year on Memorial Day, Sturtz and his fellow living historians visit the colonel's grave, fire three volleys in remembrance, and lay a wreath from the colonel's great-granddaughter, Marian Runnells of Utah 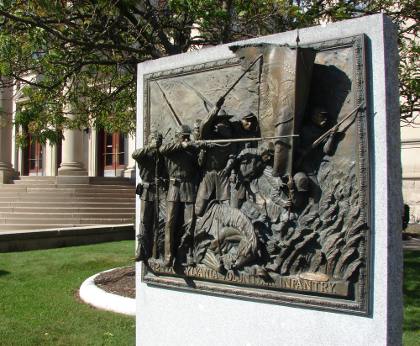