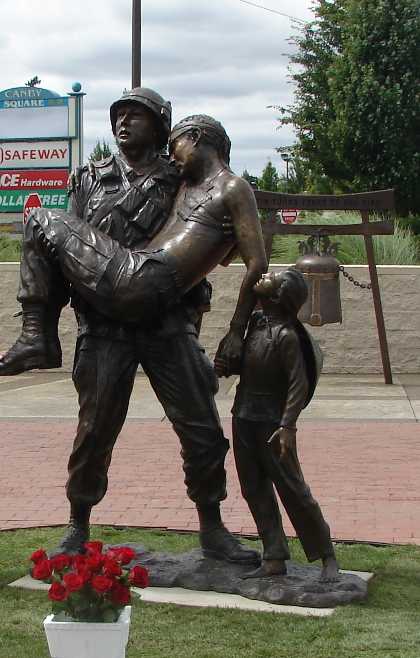 After 11 years of vision and hard work, the dream of Vietnam veteran Mike Breshears has been achieved. Breshears had stated that he wanted this memorial to be a place of healing and solace and to remember the men and women who served their country in all of the different wars.

Most people who live in or around Canby during the 11 years, pitched in to make the memorial a reality. It was a community effort, with local businesses, government agencies and the local newspaper being heavily involved in making it a reality. The nonprofit Vietnam Era Veterans' Memorial committee designed the memorial to focus on the "courage and struggle of a humanity caught up in war," he said.

This memorial is extremely special thanks to its many united components and touches deep emotions in the viewers. The heartfelt design weaves memories, tangible artifacts, cultural appreciation and sensitivity together, creating a somewhat painful déjà vu moment for many.

The large memorial site includes a Bell UH-1 helicopter – better known as a “Huey”, wearing the Red Cross symbol depicting medevac, mounted on a pedestal as if ready to touch down. The actual helicopter is a medevac which had the call sign of “dust off” in 1963. During the Vietnam War, wounded servicemen were airlifted to hospitals within an average of 35 minutes, saving thousands of lives.

The pavers that are under the helicopter make out a “Shou” symbol, meaning “long life” or “longevity” in Vietnamese.

A Buddhist Temple bell with the inscription in Vietnamese: “Believe in Peace” is yet another sensitive component along with with bamboo, pine, palm, and other plant materials that can be found in Vietnam, growing along the plaza. These particular components serve to celebrate Vietnamese culture and also be a memorial to them.

Completing the vision is the bronze sculpture titled “A Hero’s’ Prayer” by renowned sculptor Wayne Hyde of Mann’s Choice, P.A.

The statue itself invokes emotion as it depicts a wounded soldier carried by another soldier with a Vietnamese girl holding the wounded soldier's hand.

The wounded soldier represents Army Spec. Warren E. Newton of Canby, who was 18 on Jan. 9, 1968, when he went missing in action. The soldier carrying Newton represents Marine Pfc. Gary W. Martini of Portland, who was awarded the Medal of Honor for rescuing two other Marines during a firefight that killed him at age 18 on April 21, 1967.

The tender scene was thoughtfully designed so that when you stand at the park, looking from behind the bronze sculpture towards the helicopter it appears as if the subjects in the statue are moving toward the medevac helicopter about to land.

This creates a very powerful and deeply emotional image.