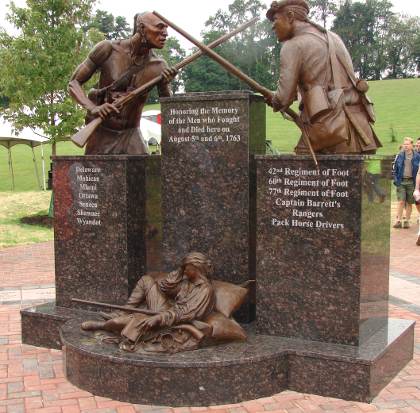 Commissioned by the Bushy Run Battlefield Heritage Society for the 250th anniversary of the Battle of Bushy Run, the monument is placed on the spot where the first day's action on Aug. 5, 1763 took place.

The monument includes three bronze statues atop three granite pedestals, representing the American, British and Indian forces that fought during the pivotal battle.

Renowned historical artists Robert Griffing of Gibsonia and John Buxton of Allison Park came up with the concept for the monument, which Griffing sketched showing a Native American, a (Scottish Regiment) Highlander and a Ranger.

Griffing and Buxton are good friends and members of the Heritage Society and both have created paintings depicting Bushy Run. A painting Robert Griffing created of the first day's battle hangs inside the museum. Its image was used for the 250th anniversary celebration poster.

Based on extensive historical research, Griffing said he placed the ranger on flour bags below the Indian and the highlander, who aim weapons at each other. On the first day of the conflict, wounded soldiers were laid behind a “flour bag stockade.” Other soldiers guarded the circle from the outside, Griffing said.

Bronze sculptor, Wayne Hyde of Bedford County, along with Griffing, photographed re-enactors for the sculptures. Armed with the sketch as the basis for the design, plus the photographs and further research, Hyde went on to create three powerful individual bronzes capturing a moment in time and honoring those who lost their lives in the battle. 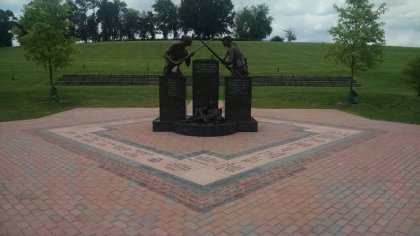 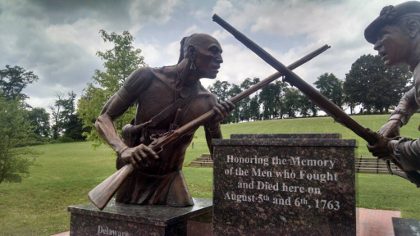