A Letter From Home 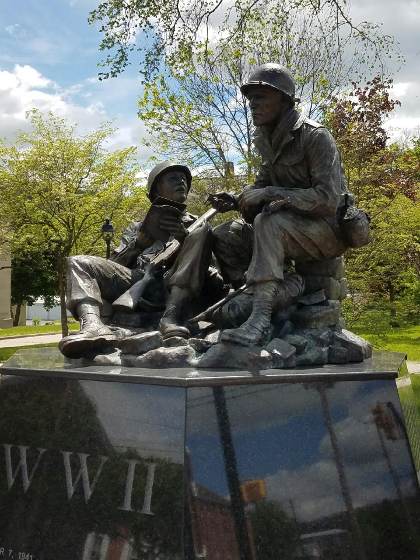 The bronze statue in the monument, sculpted by local artist Wayne Hyde, sits atop a granite pedestal with the names of 170 Bedford County veterans who were lost during World War II. The pedestal and statue is surrounded by The Honor Walk which features approximately 750 bricks with the names and military service of area World War II veterans.

The design and development of the monument was completed by a community group known as The League of Pretty Good Guys and was paid for entirely by members of this small community.

Resting atop a pile of rubble, an Army sergeant stares into the distance, dog tags in hand, as a comrade reads a letter from home. “He’s thinking about the men that fell that day,” sculptor Wayne Hyde said “In his hand are the dog tags of the men who fell.”

The inspiration came from old World War II photographs that often depicted weary soldiers, sitting together, reading letters from home and experiencing a degree of solace after combat.

The statue’s sergeant is modeled on Ellis R. Weicht, a Bedford County native posthumously awarded the Medal of Honor after a brutal 1944 battle in eastern France. The statue’s second figure, reading a letter aloud to cheer up the sergeant, is modeled partly on other people but isn’t officially based on a single soldier, Hyde said.

The statue bears personal marks from scores of World War II veterans, as well: After Hyde completed a clay version that would form a mold for the bronze, 104 county veterans pressed their thumbs into the heated clay, leaving prints that remain in the final statue.

For Hyde, who had six uncles in World War II, helping the veterans add their marks was a powerful final touch. “It was pretty special to be up there with those guys. That’s something I’ll never forget,” he said.

Note: Credit and thanks given to the Altoona Mirror and Staff Writer Ryan Brown for this story which has been abbreviated and modified from an article published on Sept. 5th 2014.. 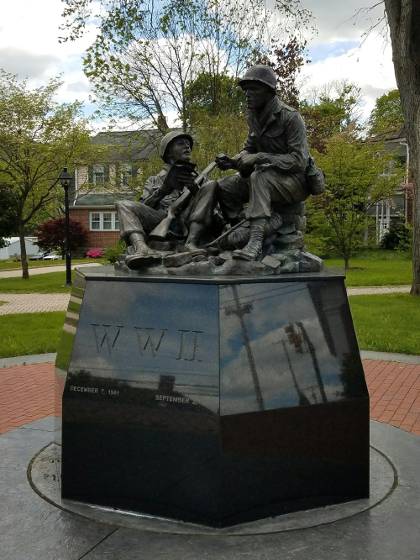