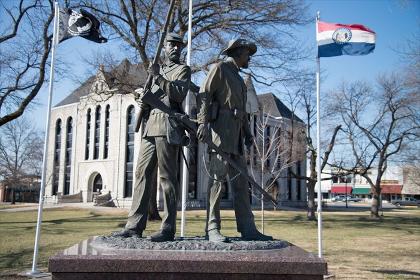 This proud monument titled “They Stood Tall” was commissioned by the City of Clinton, Missouri, in order to honor the men who fought for their beliefs from both sides of the war, the North and the South.

Sculptor Wayne Hyde of Mann’s Choice, P.A., was selected to create a bronze statue of “ordinary” soldiers both Union and Confederate representing the citizens of Missouri.

During the Civil War, Missouri was a border state populated by both Union and Confederate sympathizers and maintained dual governments. Each side was represented by a star on their individual flag. Each side sent armies, generals and provisions in support of their cause, therefore, suffering a personal, neighbor against neighbor, family against family intrastate war within the larger national war. This intrastate war was continuous between 1861 and 1865, with battles and skirmishes in all areas of the state.

Guerrilla warfare occurred throughout much of the state, with the most notable incidents occurring in northern Missouri. These were characterized by ambushes of individuals or families in rural areas and were particularly nefarious because their vigilante nature was outside the command and control of either side. Civilians on all sides faced looting, violence and other depredations.

The war in Missouri left hard feelings on both sides, many of which exist to this day.

Hope springs eternal, the saying goes, and it is hoped this monument may help to ease the hard feelings from the very painful past. 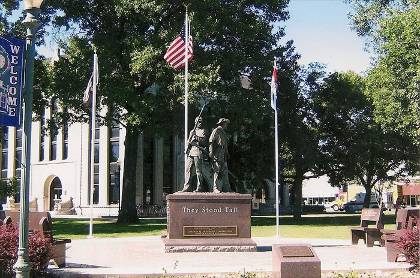