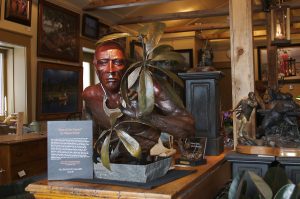 Wayne’s personal description on Eyes of the Forest:

“The trail is shrouded by the great trees and thick laurel. Those on the trail travel uninvited on this land. Quiet footsteps and cautious movements have not been enough to keep them undetected; unaware that they will soon be within striking distance of a tomahawk, now bare of its sheath. Only the passing moments will tell whether a strike will befall them as they pass under the watchful eyes of the forest.

Simple survival often had to be fought for, so a warrior’s stealth and the element of surprise made the difference between living and dying.

With this in mind, I wanted to portray an Eastern warrior in his element. I used rhododendron to create a forest mood that gives the sculpture more depth, especially when viewed looking directly at the warrior’s face.

His fierce countenance, tomahawk in hand partially hidden by leaves, with the other hand quietly parting the foliage gives it an ominous overtone.”

About the Eastern Woodlands:

Around 1570, five Woodland tribes inhabiting the eastern United States and Canada, united in an effort to limit warfare and end cannibalism. Together, the Cayuga, Mohawk, Onondaga, Seneca and Oneida formed the Iroquois Confederacy, also known as the Five Nations. This Confederacy dictated that all tribes had to concur by a vote for war, but occasionally there were instances of warfare within the Confederacy.

The Five Nations became a formidable power controlling a huge portion of Eastern North America. In the mid-18th century, the Tuscarora joined the Confederacy, which then became known as the Six Nations.

The Woodland warrior would down-dress for battle to allow for stealthy movement with minimal encumbrances.  They would travel in single file, stepping into each other’s footsteps so as not to reveal their numbers. Surprise was a major tactic. At the time of contact with the enemy, they would split up in pre-determined positions and fight as individuals.

Eyes of the Forest details:

The warrior, intentionally obscured by the rhododendron leaves, which grow abundantly in the forests of the eastern states, carries a French style tomahawk. This may have been a trade item or a trophy of war. He is down-dressed for battle. The cut helix’s of his ears are tied behind his head with a leather thong so as to avoid tearing in battle. His hair is shown in the traditional Iroquois scalp lock giving him pride and power. He is wearing a silver gorget at this throat, likely a trade item, as well as a silver nose ring. Geometric styled tattoos on his forearms are in the Iroquois style and colors.

His demeanor is fierce and ready. His one hand is securely on his weapon as he is parting the leaves with 2 fingers of his other hand, ensuring quiet with no rustling sounds to give him away. The veins are visible in his arms indicating his heightened emotion and energy and creating tension for the viewer.

Combined, these details on this life-size bronze, give the viewer an opportunity to sense the fear and foreboding that was a part of the lives and existence of the settlers and natives of those times.

As you circle the sculpture, looking from every angle, you can sense the power, the pride, the strength, the history and beliefs of this Eastern Woodlands warrior as you view his chosen tribal adornments and customs.

This is a unique and extremely powerful sculpture and has become Wayne’s most well known inspired bronze.

On a personal note, I can see this bronze, on a single, black pedestal, illuminated from above with pencil-lights, in a boardroom, indicating the strength and determination of the owner, whether a business or an individual. Someone who dares to walk the road less traveled and looks back in time on the virgin forest and the lives lived there with strength and honor.

There is still a small number of the Edition of 25 Eyes of the Forest available. Contact Wayne for details.